Dr. Gabriele Schwaizer from ENVEO lectured on "SAR/Optical Applications to Ice and Snow" at the 9th ESA Training on Radar and Optical Remote Sensing in Vilnius, Lithuania. In the associated practical training, the participants gained experience on the generation of wet snow maps from Sentinel-1 C-SAR data, and of binary as well as fractional snow extent mapping from Sentinel-2 MSI data.

ENVEO analyses time series of Sentinel-1 and Sentinel-2 images since November 2016 to track the development of the "Halloween Ice Crack" on the Brunt Ice Shelf, near the British Halley VI research station in Antarctica.

More information and movies showing the ice crack development from November 2016 till February 2017 can be found at the ESA News, http://www.esa.int/Our_Activities/Observing_the_Earth/Sentinels_warn_of_dangerous_ice_crack, and in the Daily Mail, http://www.dailymail.co.uk/sciencetech/article-4232854/Copernicus-images-reveal-halloween-crack-Antarctic.html.

Satellite sensors deliver key information on the mass balance of ice sheets and glaciers through observation of surface topography and topographic change. Satellite-borne altimeters and interferometric SAR provide a comprehensive data base for this task. The integration of data from the different sensors requires sensor specific corrections accounting for differences in spatial resolution, coverage and signal penetration.

In order to support the development and validation of data integration and correction algorithms for topographic sensors, ENVEO CEO Helmut Rott conducted field measurements in Antarctica in December 2016, studying structural properties and stratification of snow and ice. The field sites are located in the Heritage Range, West Antarctica (79.7 deg. S, 83 deg. W). Comprehensive logistic support was provided by Antarctic Logistics and Expeditions (ALE). The snow pit measurements cover different snow and ice regimes, including bare ice surfaces (blue ice) and snow packs at sites with different wind exposure conditions and accumulation rates. These data provide an excellent basis for evaluating satellite topographic data from various satellite missions such as TanDEM-X, CryoSat and ICESat, as well as for validating electromagnetic models on radar signal propagation in polar snow and ice. 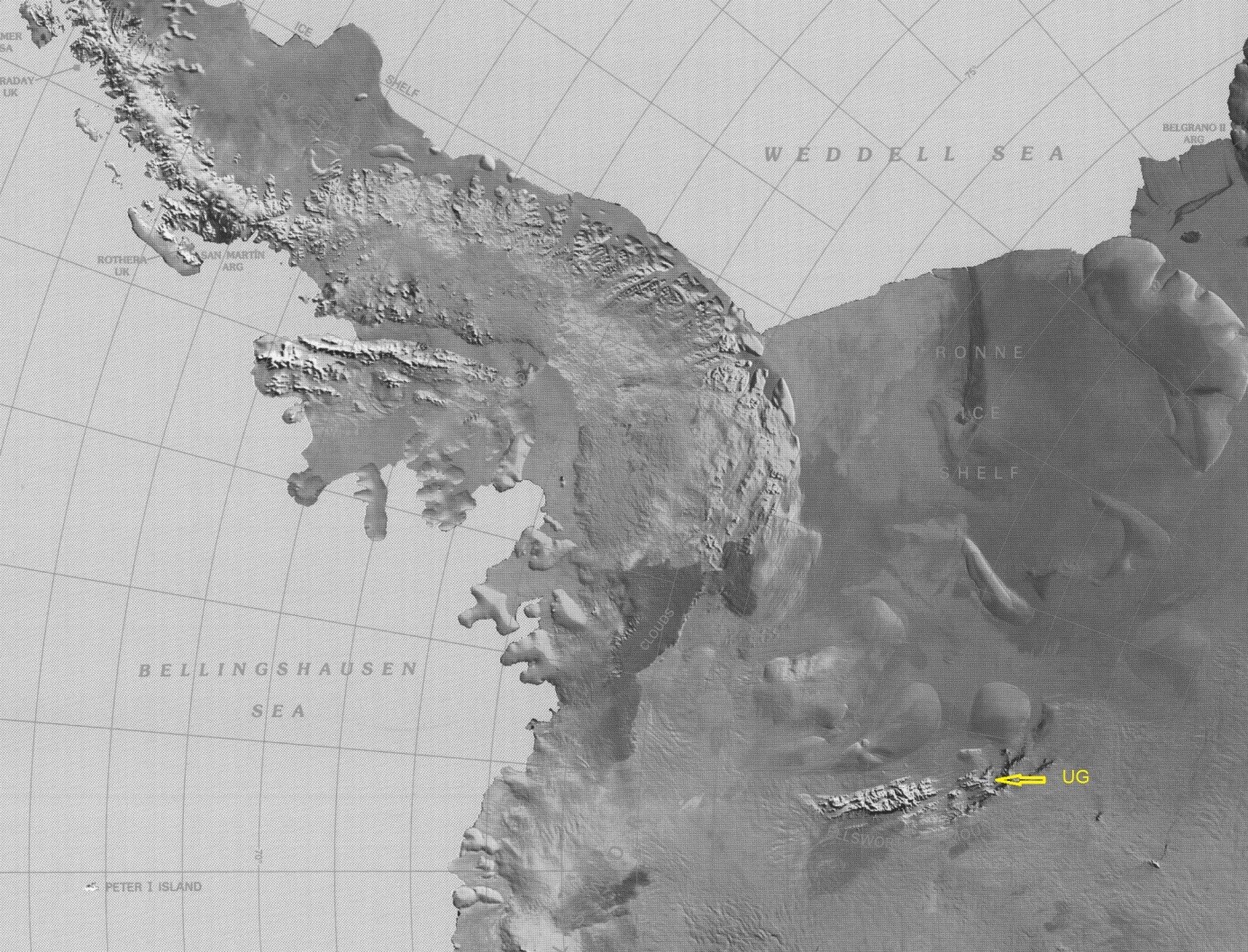 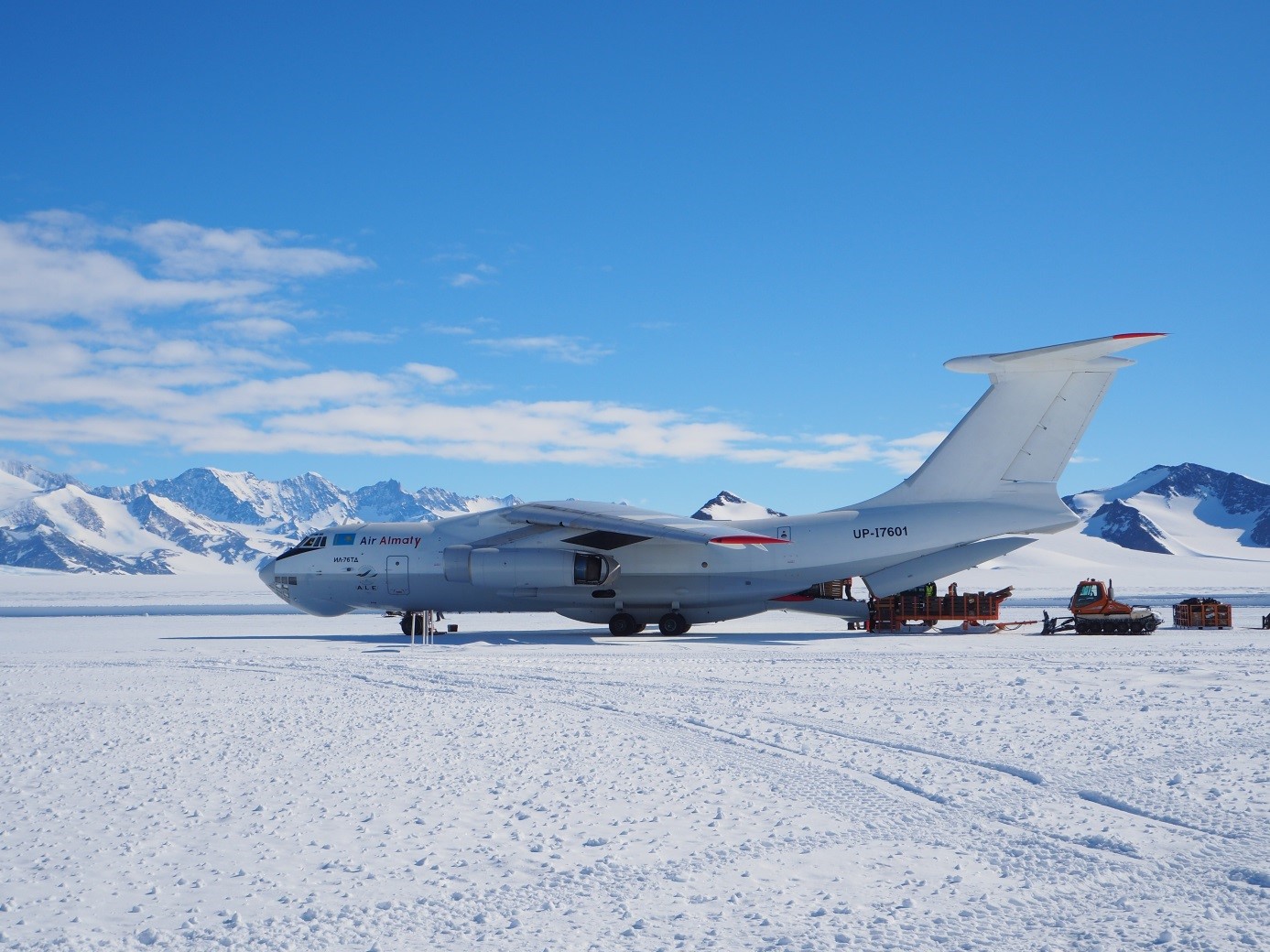 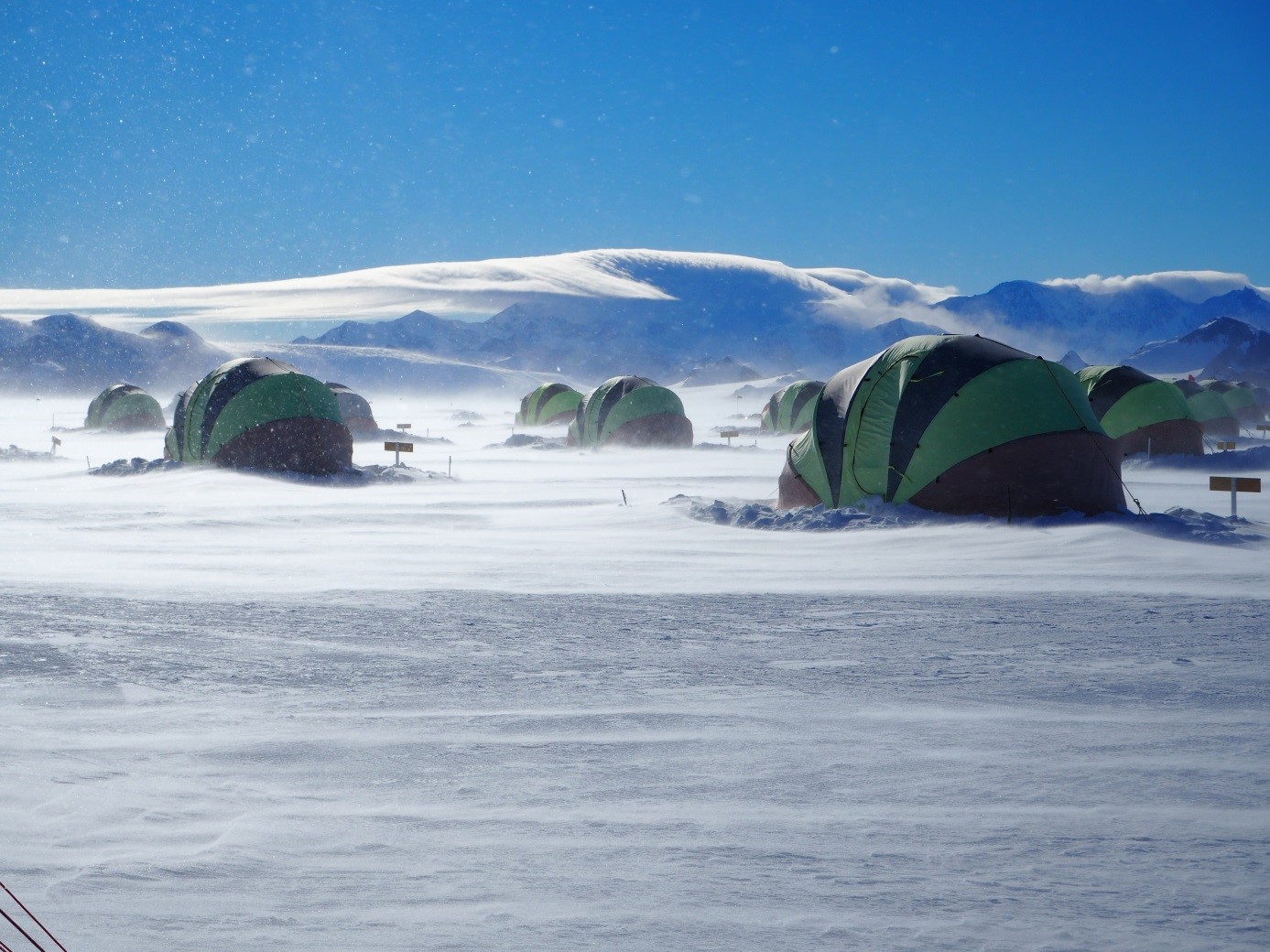 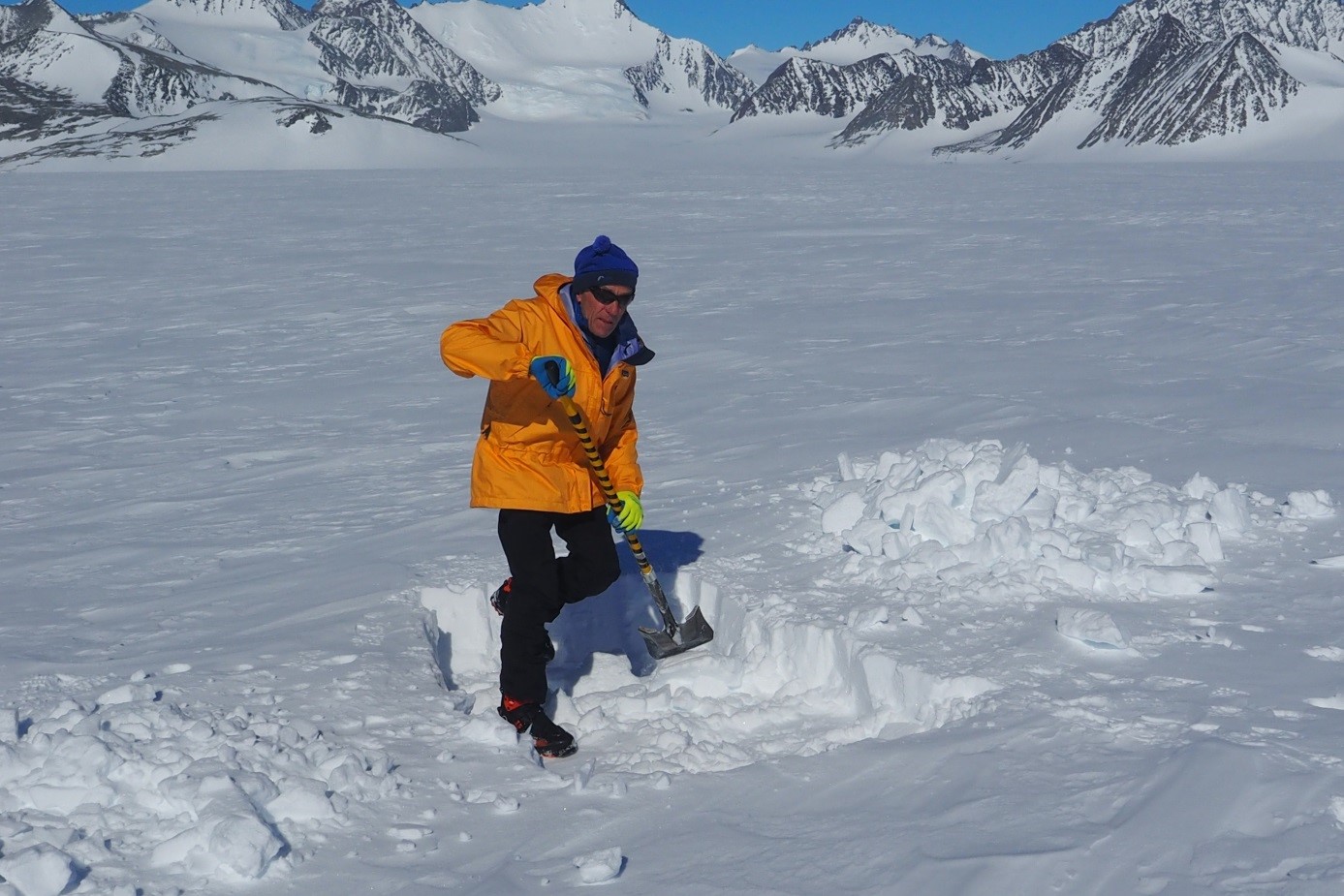 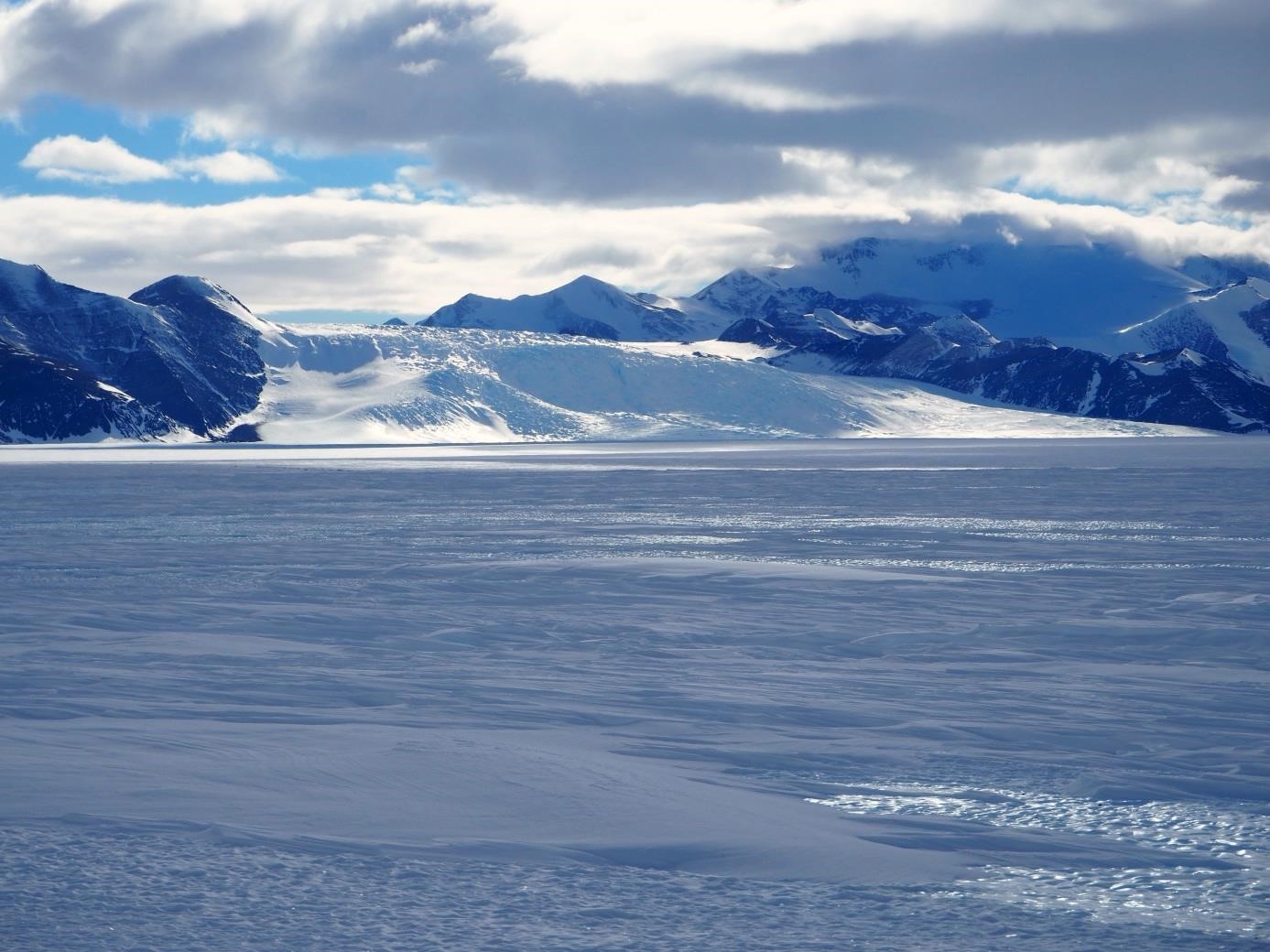 Fig. 5: Drift snow and blue ice near the air field. Drake Icefall in the background.

ENVEO is collaborating with DLR on the analyses of TerraSAR-X and TanDEM-X data. New results of the ice dynamic of the Antarctic Peninsula were recently presented at the Science Meeting in Oberpfaffenhofen. Some of the results are included in the Space Blog of DLR.

A new scientific data portal on satellite based products for ice sheets, glaciers and seasonal snow by ENVEO

We would like to advertise the newly released scientific data portal which provides convenient functionality for searching, viewing,  visualising and downloading satellite based products for ice sheets, glaciers and seasonal snow.  Products are freely available for download after simple registration. We will frequently update and extend the data sets on the portal. The products are generated by ENVEO and several partners in various projects, funded by ESA, EC and national agencies. (see https://cryoportal.enveo.at)