The AlpSAR campaign supports preparations for the CoReH2O (Cold Region Hydrology High-Resolution Observatory) satellite which is one of three candidate missions of the Earth Explorer Programme of ESA. A main objective of CoReH2O is to map and monitor the mass (the snow water equivalent, SWE) of seasonal snow on land surfaces and of winter snow accumulating on glaciers. The CoReH2O sensor is a dual frequency (Ku-band and X-band), dual polarized (VV, VH) synthetic aperture radar (SAR). The retrieval of snow mass is based on inversion of radar backscatter measurements using a radiative transfer model. Experimental backscatter data, measured by ground-based scatterometer systems and airborne SAR sensors, are essential for testing and validating theoretical backscatter models and inversion algorithms, and for supporting further development of retrieval algorithms. During the AlpSAR campaign 2012/13 radar backscatter images will be acquired over three test sites by the airborne SnowSAR instrument. SnowSAR has been developed and is being operated by MetaSensing. The first SnowSAR campaign took place in winter 2011/2012 over Sodankylä in northern Finland, collecting backscatter images of snow over bog, tundra and forested areas. Because snow pack structure and morphology can be quite different in other regions and over different background targets, the AlpSAR campaign is aimed at enhancing the experimental data base by covering different snow regimes and terrain types. Three test sites in different elevation zones have been selected for AlpSAR in order to cover various snow regimes: Leutasch at about 1200 m above sea level (a.s.l.) where the land cover is dominated by meadows, Rotmoostal (near Obergurgl) at about 2200 m a.s.l. in the Alpine tundra region (Fig. 1, 2), and Mittelberferner (an Alpine glacier) where the main field measurement will be taken between 2800 and 3200 m elevation (Fig. 3, 4, 5). Field measurements on physical properties of snow and soil and on meteorological parameters are performed by the company ENVEO IT, supported by the Federal Research Centre for Forests, Natural Hazards and Landscape (BWF), both with their offices in Innsbruck, Austria. In October 2012 automated measurement stations were deployed in the test sites Leutasch and Rotmoos (Fig. 2), and temperature sensors were drilled into the glacier Mittelbergferner (Fig. 3). The first SnowSAR flights took place on 20 and 21 November 2012, covering the background signal of the snow free ground in Leutasch and capturing early winter snow conditions in the other two test sites. On the glacier between 0.6 m and 1 m of snow had accumulated since end of summer. Transects of snow depth were measured along and across the glacier and vertical profiles of snow density, grain size, startification, and snow temperature were measured in snow pits (Fig. 4, 5). Detailed measurements on physical snow properties were also performed in the test site Rotmoostal. From the Hohe Mut peak above terrestrial laser scanner measurements were performed to obtain a baseline map for snow depth mapping. The next SnowSAR deployments over these test sites are scheduled for early January and late February. 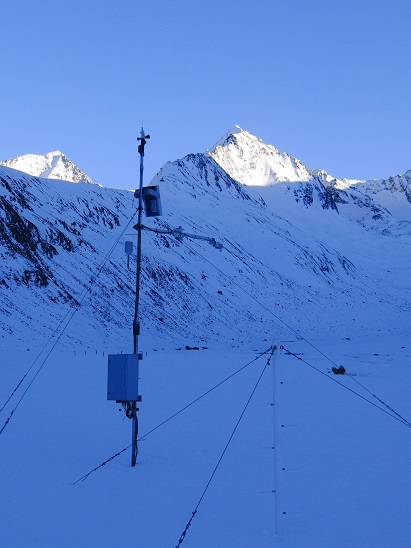 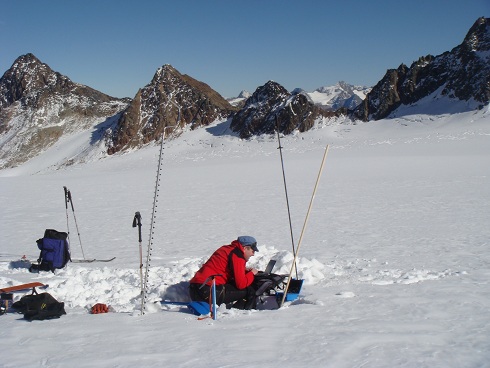 Fig. 3. Checking temperature sensors, drilled into the ice of Mittelbergferner in October 2012, in preparation of the AlpSAR campaign. (Photo ENVEO) 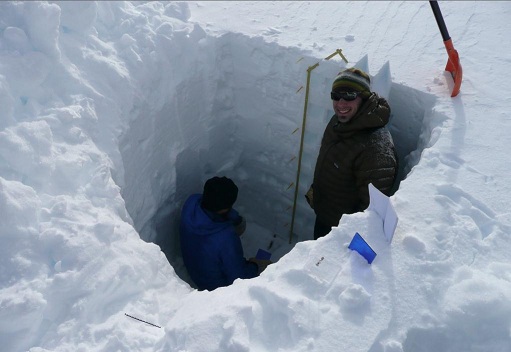 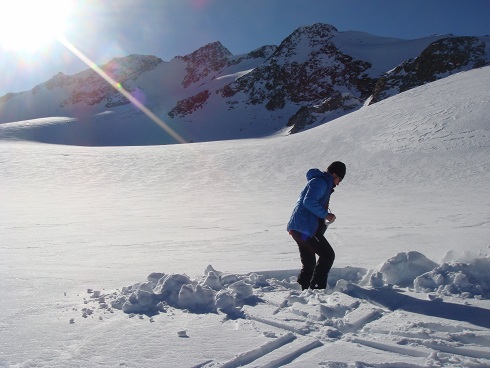 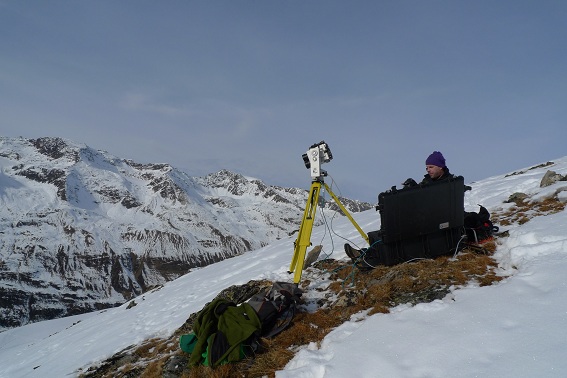 Fig. 6. Set up of terrestrial laser scanner in the peak Hohe Mut for measuring snow depth in the Rotmoostal below. (Photo BFW) 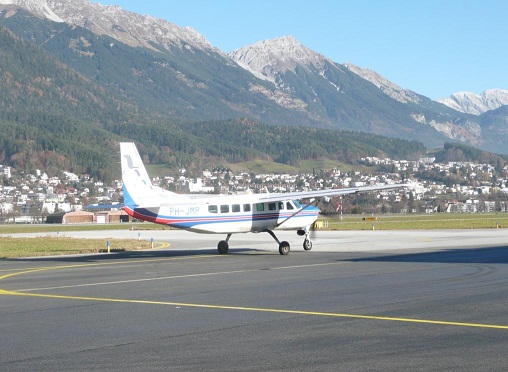 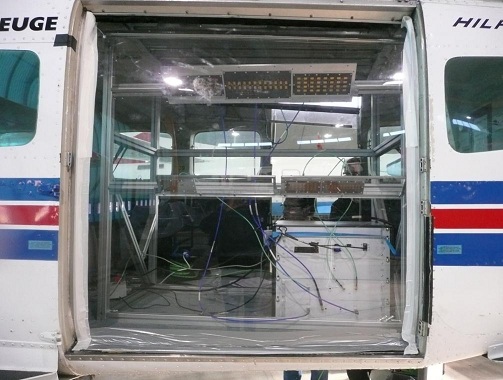 Figure 8: Start to the data acquisition in November 2012 (Foto ENVEO), (left) The X- and Ku-Band Snow SAR Sensor (developed and operated by Metasensing) installed in the aircraft (Photo ENVEO).